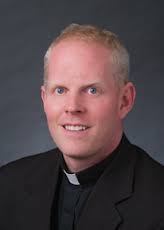 Father Rogers was ordained a Catholic priest in the year 2000. For the first five years of his priesthood, he served as parochial vicar at Saints Philip and James Parish, Exton, PA. The next five years, Father Rogers was the Director of Vocations to the Priesthood for the Archdiocese of Philadelphia. Later, he served as a member of the Catholic Campus Ministry Association and the Pennsylvania Catholic Campus Ministry Association, as well as the Campus Minister of Immaculata University.

The oldest of five children, Father Rogers was born in Hamilton, New York and attended Bishop McDevitt High School in Wyncote, PA. He earned four degrees from St. Charles Borromeo Seminary in Wynnewood, PA, including two undergraduate degrees: a Bachelor of Arts and a Bachelor in Sacred Theology; and two master’s degrees: a Master of Arts and a Master of Divinity.

For four years Father Rogers was the host of “The Vocation Hour” on Holy Spirit Radio (WISP 1570 AM/WCOJ 1420 AM) which broadcasts throughout the Philadelphia area. Father also has his own podcast of his Sunday homilies which can be listened to here. He was inducted into the Bishop McDevitt High School Alumnae Hall of Fame in April of 2009.

St. Patrick Parish is blessed to have Fr. Rogers as our pastor!